In 1983, the NSS completed the purchase of 42 acres of forested land at Trout Rocks near Franklin, West Virginia. This property contains the entrances to three well-known, popular caves: Trout, New Trout, and Hamilton. Each cave is more than three miles long and has been the site of significant paleontological excavations. The property has been designated the John Guilday Caves Nature Preserve in honor of one of the foremost paleontologists in the country who worked with cave-deposited materials. He was a long-time NSS member who led initial paleontological studies in Trout Cave and worked as a research curator at the Carnegie Museum of Natural History.

The John Guilday Cave Nature Preserve is managed with the goals of encouraging and monitoring bat hibernation, maintaining preservation of the paleontological sites, permitting recreational caving, and maintaining the woodland environment. In 2008 a cave gate was constructed for Trout Cave to protect the endangered Indiana bat (Myotis sodalis) population that uses the cave as a winter hibernaculum. Because Trout Cave is now utilized by two endangered species, the Indiana bat in the winter and the Virginia Big Ear bat in the summer, it is closed most of the year, but has been opened for limited visitation with specific guidelines to avoid disturbance of the bat colonies. The other caves on the Preserve are open year-round. 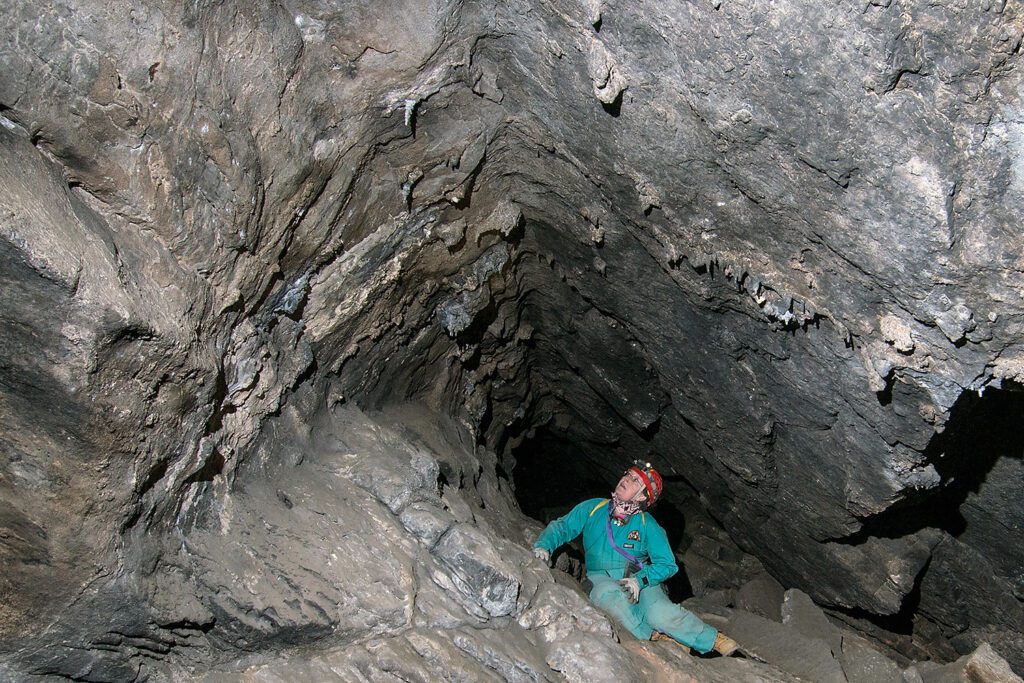 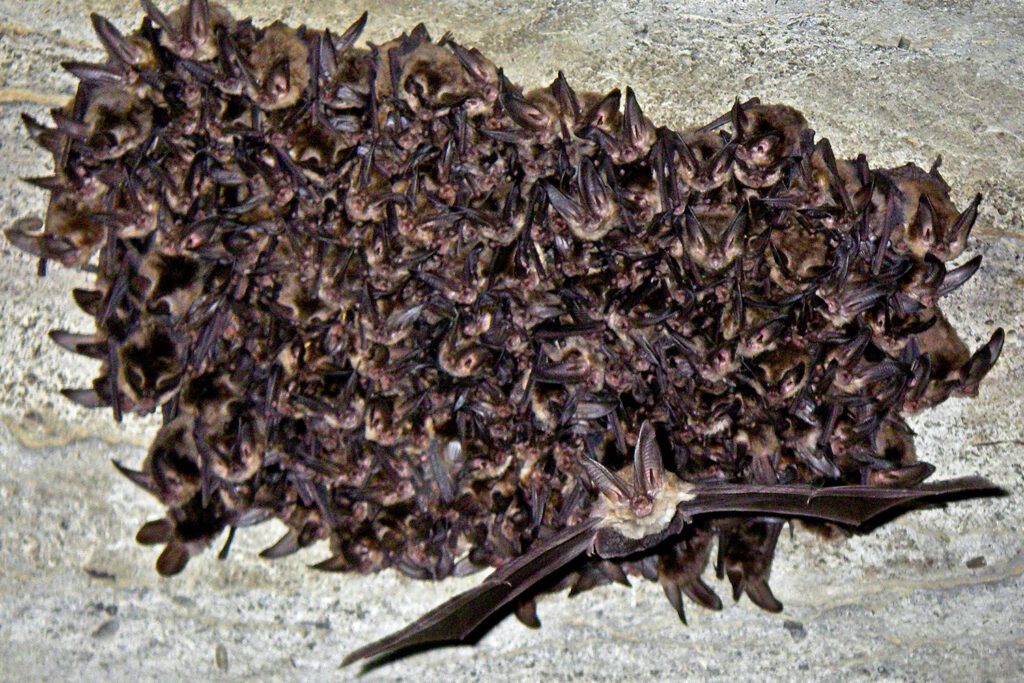 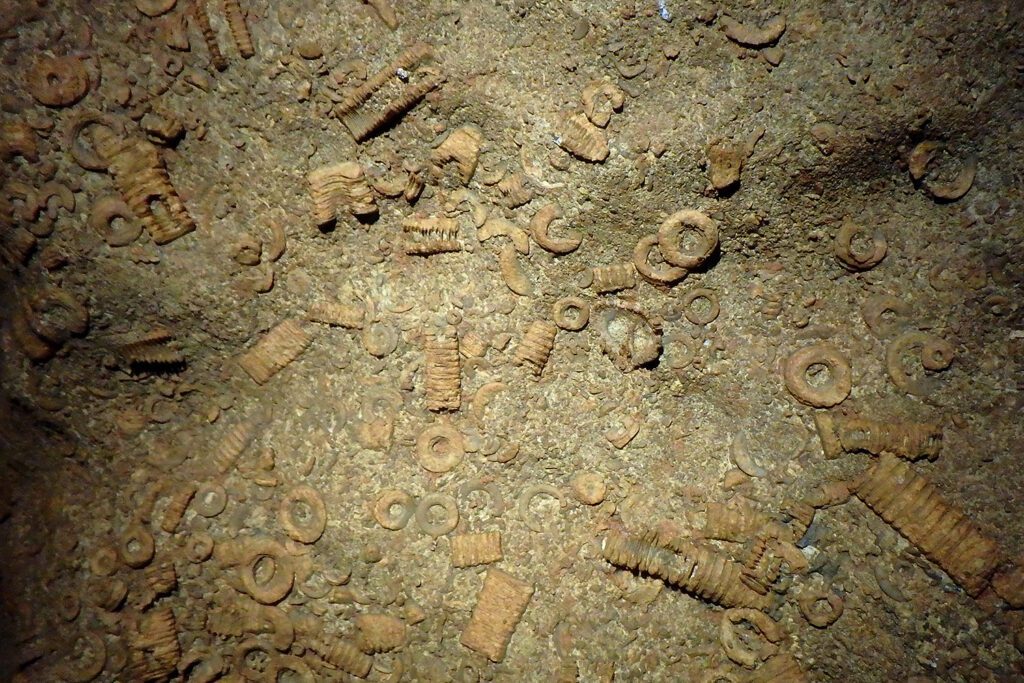 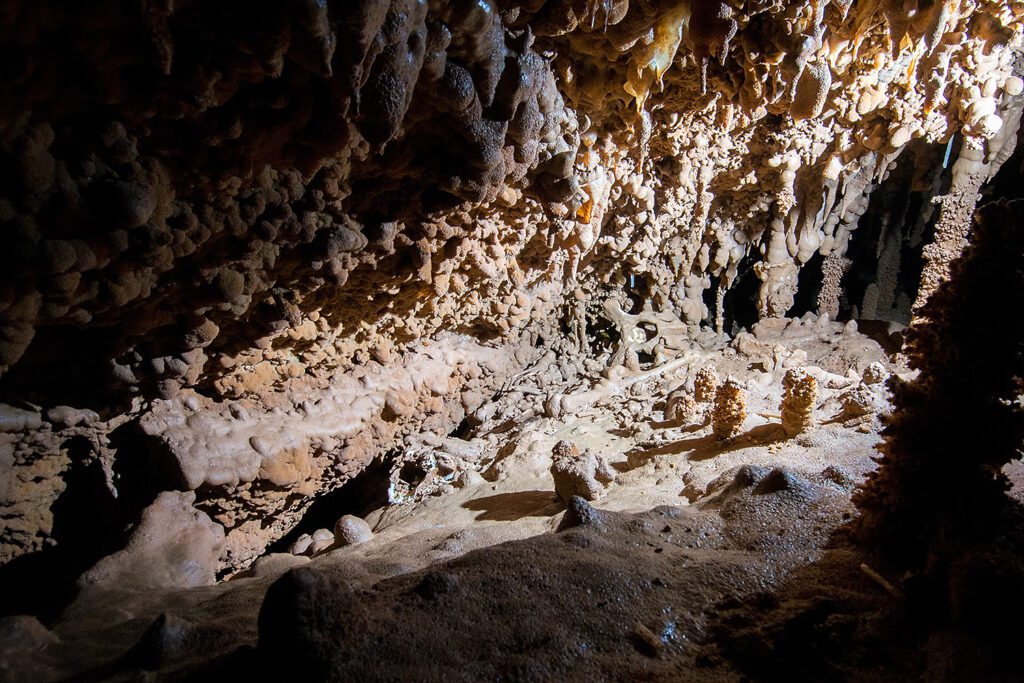 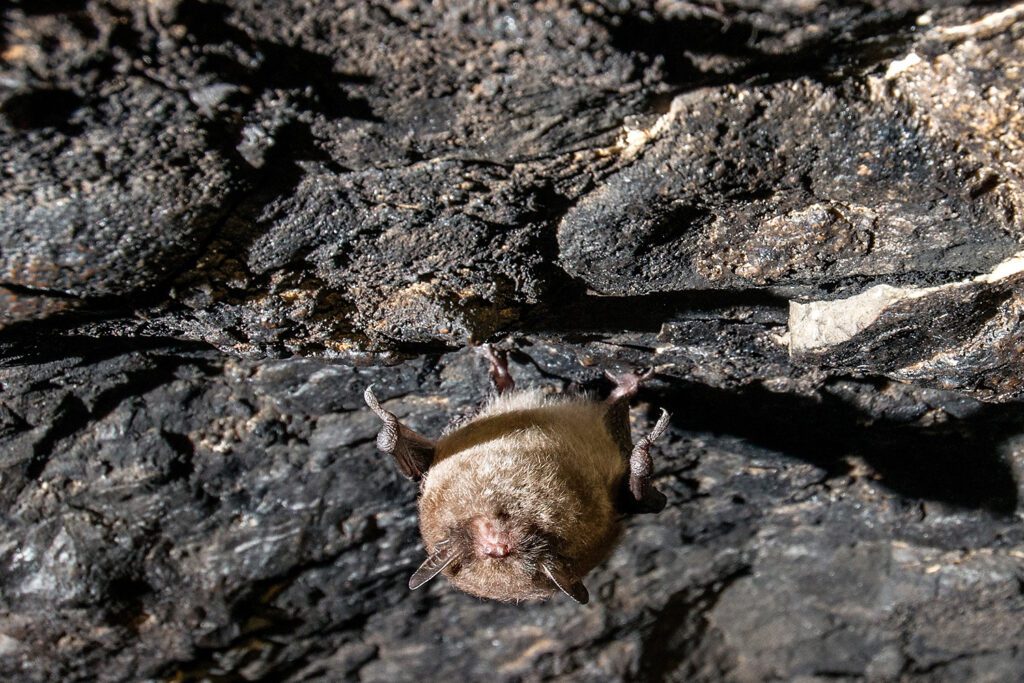 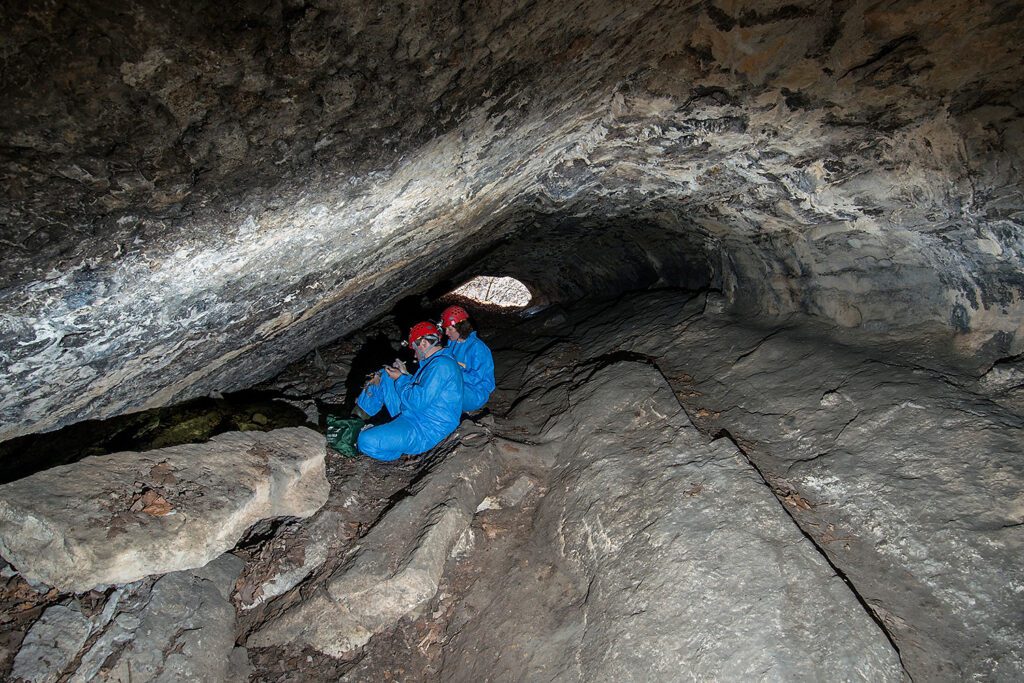 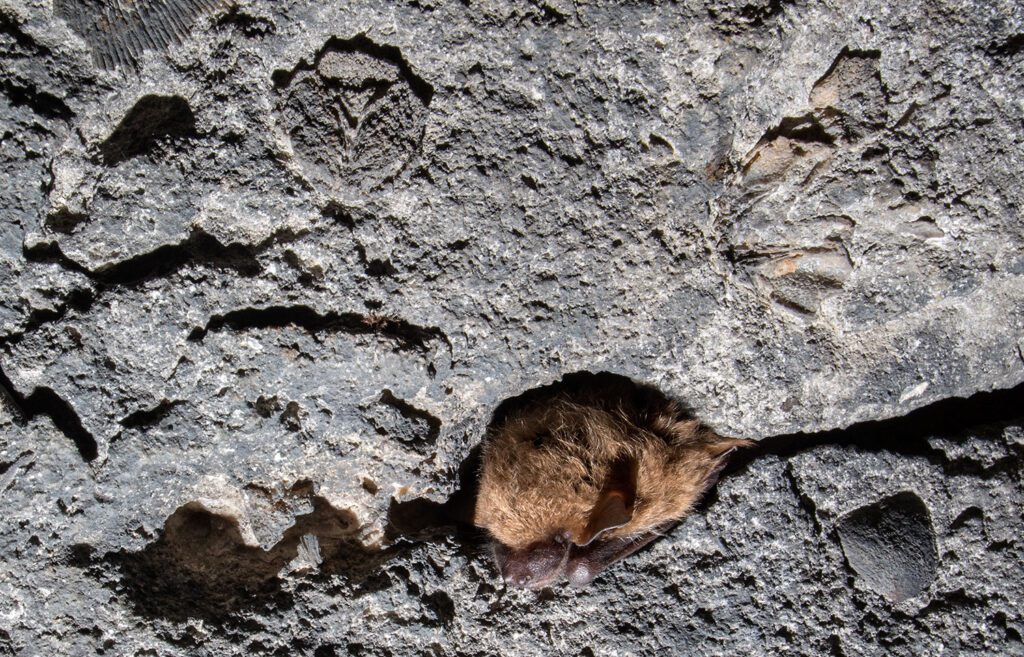 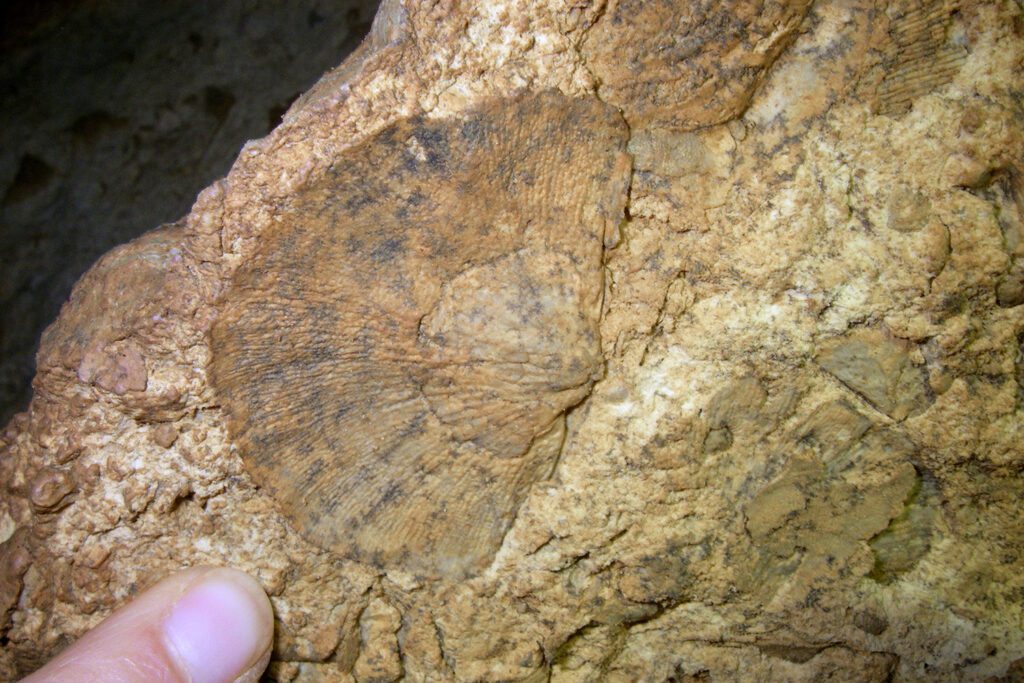 The caves on this property have been known since the earliest settlement of Pendleton County, Virginia (now West Virginia), which at the time of first settlement was part of Augusta County. It appears that the caves first came under private ownership on July 19, 1787, when they were surveyed for John Penninger. The caves were already being worked for saltpeter, or were so worked shortly after that date. The first operator whose name we have was John Mefford, who leased a property across the river from John Penninger in 1795. The caves were worked for saltpeter from then until the end of the Civil War, though not continuously. According to the 1810 Census of Manufactures, the annual production of saltpeter was 4,000 pounds. According to the 1820 Census, 12,500 pounds of gunpowder was manufactured on the site during the War of 1812, using saltpeter extracted from the caves. At the time of the 1820 census however, it states (the) "works are presently not worth attending to."

During the Civil War, the caves were operated for the benefit of the Confederacy and were frequently raided by Union troops. There are no references to further economic uses of the caves themselves following the Civil War.

In 1867, the property changed hands, passing from the McCoy family to the Hiner family. Over the period 1870-1880, it passed from the Hiners to James W. Kee, who sold the property to Martin Moyers on March 1, 1882. The cave tract remained in the Moyers family, being part of a larger tract of some 1,142 acres at one time, from that date until March 15, 1983 when the NSS purchased the tract.

The caves were among the earliest ones explored and mapped by members of the NSS. Non-comprehensive maps of all three are included in William E. Davies’ Caverns of West Virginia (1958). Members of The DC Grotto and The Potomac Speleological Club re-mapped the caves in the 1980s and it is these maps that are now considered the most up-to-date and comprehensive.

The caves are home to the usual assortment of bats common in West Virginia, and as already noted, Trout Cave harbors a winter hibernaculum site for a number of the endangered Indiana Myotis, and summer residency of the endangered Virginia Big Eared Bat. Bat census counts are conducted in the winter annually in Hamilton and New Trout Caves, and semi-annually in Trout Cave in accordance with the U.S.F & W.S. species recovery plan. Many of the caves on the hillside are home to the Allegheny woodrat, a "species of concern" in West Virginia as its habitat is dwindling. The caves are generally dry, and a search for invertebrates conducted by Dr. Dave Culver and Dr. Dan Fong produced a few cave adapted species, but nothing of major interest. An unusual spider previously reported in Trout Cave was not seen during this sampling.

The caves at Trout Rock, taken separately, are excellent examples of cavern development in the Alleghany Mountains. All three major caves are formed in the New Scotland Formation near its lower contact with the Coeymans Formation (Devonian Helderberg Group). NSS Flood Cave is formed lower in the Keyser Formation. New Trout Cave is primarily a single tube with some branching tributaries. Trout Cave, a parallel system just to the west, also contains one or more master conduits, but in addition has developed rudimentary branching and networking maze sections. Hamilton Cave, further to the west, is an archetypical network maze cave with passages developed along two primary fracture sets intersecting at right angles. NSS Flood Cave exhibits similar development to Hamilton Cave, but is less extensive.

These caves, taken as a system, tell yet another story, and their interrelationship makes the geospeleogy of the Preserve special among Appalachian caves. All three major caves conform well to the same stratigraphic unit, the New Scotland Limestone. New Trout, Trout, and Hamilton Caves are all relatively horizontal, but are at progressively higher elevations. This is because the beds of limestone dip (tilt downward) to the east, forming a broad anticlinal fold.

The caves of the John Guilday Caves Nature Preserve provide a prime locale for observing the influence of geologic structure on the development of caves. Proximity of the caves to one another and their stratigraphic positions emphasize the spectrum of structural control more than at any other locality of similar size and accessibility in the West Virginia cave region. With the exception of NSS Flood Cave, there are few calcitic formations in the caves on the property. Visitation to NSS Flood has been limited almost exclusively to the initial exploration and mapping of the cave. The entrance has been returned to its natural state and its location is not well known. Access is highly restricted to protect the unusual number of formations therein. The NSS holds all mineral rights to the property.

All three major caves on the John Guilday Caves Nature Preserve have been found to have deposits of fossil bones and teeth dating from the Pleistocene Epoch, ranging in age from about 17,000 to about 70,000 years before the present. Each of the three caves contains several bone sites. Carnegie Museum employees under the direction of John Guilday made the first discoveries of fossilized bones at Trout Cave in the late 1960s. These excavations were important because the bones found proved to be older than most of those found at other cave sites in the Northeast. Beginning in the late 1970s and continuing to the present, additional sites have been found in New Trout, Trout, and Hamilton Caves. Workers from several museums and universities have been studying the fossils.

Thousands of specimens have been collected and identified, including fish, amphibians, reptiles, birds, and mammals. Several extinct species have been identified from the Preserve caves, including ground sloth, dire wolf, short- faced bear, saber-toothed cat, and extinct relatives of the horse and musk ox. Other specimens recovered from the caves include existing species that no longer live in West Virginia, such as caribou, badger, pocket gopher and water rat. During the past several hundred thousand years as the glaciers advanced and retreated, the climate fluctuated in the area around the caves, causing remains of animals with different climatic preferences to be found. Historic Trout and New Trout Caves were extensively mined for Saltpetre in the 19th century. Few artifacts remain, although the occasional paddle or timber is found. Most common are spent faggots (torches). Tally marks are also seen on occasion, as well as sporadic drill holes from blasting.

The management committee has received reports that a "back" entrance to Trout Cave was observed in the 1950s, and also that Peter Hauer during his saltpetre research discovered an upper level that was a 600-foot-long passage paralleling the main passage containing many undisturbed artifacts. In an effort to preserve artifacts in situ, he reportedly then completely filled in the connection to the main cave. He then passed on without providing adequate information about the location of this connection to allow its restoration. Evidence of such a passage has been observed. The committee believes the so-called back entrance (reportedly too small for entry) and the lost passage are connected, and that restoration of the connecting passage may restore the habitat in addition to providing a site for further study on saltpetre mining of the 19th century. Promising sites are examined and pursued as they come to view, usually by digging.

Within the various caves on the property, only NSS Flood has any permanent moving water, a small impenetrable sump at its lowest point. In Trout Cave, an intermittent stream can be found in the Square Room. The few formation areas in Hamilton Cave contain small pools that are generally present all year.

Permission to visit the property is not required. Please stay on the designated trail, sign in and out in the book located at the kiosk. When signing in, include number in party, the cave you are visiting, and the expected destination in said cave. Please report any concerns or problems to the preserve manager.

Requests for access can be made by contacting the Preserve Management Team via email at: GuildayPreserve@caves.org with any questions.