McFails Cave in New York is the longest known cave in the northeast United States with more than 6.5 miles of mapped passage. The cave is named after Thomas Alfred McFail, a professor at the old Carlisle Seminary, who lost his life in the cave in 1853.

The McFails Cave Nature Preserve consists of two parcels of land: the McFails Hole parcel, which contains McFails Hole, Acks Shack, and the Honors Cave Disappointment System, as well as the Halls Hole parcel, which contains Halls Hole and the Coeymans Dome Sink. Even though both parcels are landlocked, the NSS has easements for parking and access to manage the Preserve for recreation, exploration, and scientific study. Please note that McFails Cave is closed from October to May due to the bat hibernaculum. 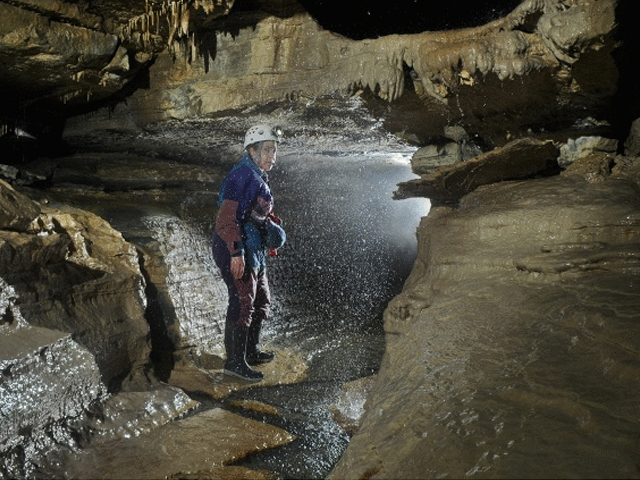 McFail's Cave is named after Thomas Alfred McFail, a professor at the old Carlisle Seminary, who lost his life in the cave. The most accepted version of McFail's death is related by William E. Roscoe in his History of Schoharie County (1882).

Prof. McFail, of Carlisle Seminary, an accomplished gentleman, met an untimely death at the entrance of the Cavern after exploring its depths, with others in 1853. The professor was on a rope used to draw persons up from the pit and on coming in contact with the outer air, he fainted and fell backward, striking upon his head which badly fractured the skull and from which he survived only a short time.

According to Roscoe and Hamilton Child (the prodigious gazetteer writer) further explorations of the cave ceased. In the early 1900s John H. Cook entered and mapped Cave Disappointment (also on the NSS's property), but he was unable to get into McFail's Hole. In the late 1920s and 30s Arthur Van Voris's group of cavers seems to have been the first to enter the cave since McFail's death. They explored all that was known of the cave as late as January 1961 when Norm Olsen's map was published in the NSS News.

However, 1961 was to be a big year for the cave. Hugh Blanchard, Marlin Kreider, and Art Palmer pushed upstream through 1,800 feet of joint-controlled passages, with swimming-depth water and high domes, ending in a sump plumbed to a depth of 31 feet. The big discovery came when Fred Stone, Spencer Weart, and Ken Miller bypassed Olsen's Siphon, at what was then the downstream end of the cave, and discovered what is now the main part of the cave. On subsequent trips Fred as accompanied by Ben Stone, Tom Hallinan, Elean Benjamin, Frank Howarth, Nan Coles, and Bill Bousman. They explored down to the terminal siphon, up the Southeast Passage, all the way up the Northwest Passage, and to Nethaways Dome. The cave had suddenly become the longest in the northeast, measuring about five miles in length.

Later in 1961 the original McFail's Hole entrance showed signs of collapse. An alternate entrance had to be found. A route from Cave Disappointment proved disappointing, but a crawl connecting the base of Ack's Shack (named for Ernest Ackerly) and the stream passage was eventually dug by Fred Stone, Frank Howarth, Chuck Porter, Art Palmer, and Stan Moore. The McFail's Hole entrance did collapse (Art Palmer was probably the last person to use it; it was collapsing as he was climbing out). This made Ack's Shack the only way into the cave. Unfortunately, this entrance has always been felt to be less than desirable. The narrow traverse and the waterfall and the tight, long crawl are troublesome obstacles. Nevertheless, the cave was considered one of the best of its kind. Fred Stone and other Cornell Grotto members purchased the cave entrance, an oddly shaped acre of land containing several pits, and "cave rights" beneath the land over the cave. This was presented to the NSS Board of Governors and "suddenly the NSS found themselves with a cave."

In 1968 tragedy struck when one of a party of four was unable to exit the cave. Gerald Alderman became stuck in the narrow traverse in the Ack's Shack entrance and with cold, snow-melt water falling on him he soon died of hypothermia. The remaining three cavers were charged and convicted with trespassing. In an unusual move, Jim Gage, then lawyer for the NSS, prevailed upon the local town justice to convene court in the Cobleskill Hospital where the three men were recuperating from exposure. They were tried, convicted, and fined before they even got out of the hospital. This probably prevented a major lawsuit against the Society.

In August 1984 Paul Rubin along with Phil Bodanza, Marc Cassler, and Carl Snyder started the explorations at the end of the Northwest Passage. The last 600 feet of the Northwest Passage beyond the Northwest Dome is quite different from the rest of the passage. Instead of large walking passage, the caver encounters crawls, unstable breakdown, and nearly-water-filled passages. Entry into the passages beyond The End of the Northwest was made in September 1984. Explorations continued during the rest of the 1984 caving season and in 1985. In all approximately a half mile of new cave ending at the Asia Dome was discovered.

Simeon Warner, Jim Goetz and David Lyons pushed past Asia Dome through the lie back, a low air space chest constriction, and found going passage during the summer of 2003. Subsequent survey/push trips by Simeon and others between 2003 and 2005 increased the length of the cave by more than a half mile. They ended the survey in a loose breakdown room with possible leads down through a hole to the stream, and up into an attic. Simeon also climbed the Asia Dome in 2006. At the top there appears to be a 1.5’x1.5’ opening in the bedrock dome, choked with large boulders, and no other options of a way on.

It has been known since 1968 that there were at least two sumps at the Main Sump. The first is 70 feet long followed by 800 feet of stoop walking passage. Since the late 1960s there have been several attempts to pass the second sump, but the most successful dive penetrated only 300 feet. On July 18, 1987 John Schweyen dove McFail's Main Sump. After passing the first sump and the first chamber, John entered the second sump. After 700 feet he emerged from the water into a continuation of the main canyon passage leading down to the Main Sump. After a short distance he was halted by an 8-10 foot, overhung drop. He felt he could get down this, but wasn't sure he could get up so he left.

On Sept. 12, 1987 John returned with Jim Brown and Bob Jefferys and a host of sherpas to support the three divers. (It should be pointed out that preceding and succeeding the dive there were a number of trips to carry equipment to the dive site. In all approximately 42 caver trips over three weekends were made to accomplish this second dive). Bob, Jim, and John passed the two sumps without incident surveying as they went. They placed a bolt that the top of the drop and surveyed about a half mile of canyon passage with 30- to 40-foot ceilings. The passage finally ended at a third sump.

Other explorations since the early 1960s have included scaling Nethaway's Dome in 1977 by Bob Jefferys and John Mylroie, scuba pushes of the Southeast Sump, and the exploration of feeder passages into the Northwest Passage which has yielded several hundred feet of new cave.

McFail's Cave is developed in the Coeymans, Manlius, and Cobleskill limestones. All are Devonian or Silurian in age. The rocks dip approximately 120 feet per mile to the south. The cave consists of two major passages. The Main Passage is a dip-oriented vadose canyon. The Northwest/Southeast Passage is a strike-oriented phreatic tube. Due to the dip of the rocks and the great length of the Main Passage, McFail's is 290 feet deep making it the deepest known cave in the Northeast. In addition, McFail's Cave is the longest known cave in the northeast United States with about 7.1 miles of known passage. McFail's Cave has areas that are well decorated by New York State standards. Tight control of access has prevented and will continue to prevent any vandalism of such formations.

Quarrying operations has the potential to adversely impact the cave. However, the NSS owns the mineral rights on both sides of the cave passage for a substantial portion of the cave. Further, quarries in the area are closing or reducing the scale of their operations and it is not expected that the cave will be impacted from this direction. In any event, McFail's is the longest cave in New York and the 3rd largest cave bat hibernaculum in the state. As such it is a unique resource and any project potentially impacting it would have to be reviewed under the New York State Environmental Quality Review Act. In addition, a protected wetland overlies a significant portion of the cave. (Hall's Hole is the outlet for the wetland).

In normal flow conditions, the water in McFail's Cave flows to Doc Shaul's Spring southwest of the cave through the main sump. Evidence from water tracing studies performed during flood periods suggests that during flood when the main sump can't take all of the water, the flow of water in the Southeast Passage (normally into the cave) reverses and carries water away from the cave to Howe Caverns. The main passage in Howe's is likely a continuation of the phreatic tube that forms the Northwest and Southeast Passages in McFail's Cave.

All this water comes from a combination of caves, sinks, and diffuse input up-dip of the cave and northwest of the Northwest Passage. This area is sparsely populated by single family residences and farms. There has been little evidence of adverse impact to water quality.

Little can be done by the NSS to ensure the continuation of this condition. We can stress education (don't dump garbage into sinks, etc.) and compliance with state and local regulations regarding septic systems. Down the road if development threatens any area in the McFail's Cave drainage basin, the Society must be prepared to intervene as a party-of-interest.

Any pollution that does occur in the cave will likely be caused by one of the following: agriculture chemicals, household seepage, feedlot runoff, and road salt use and storage. Right now none of these appear to be a problem. In the early 1970s a foam noticed in parts of the cave was found to be caused by a combination of cow urine and agricultural fertilizer and low water conditions. This problem went away with the end of a dry period and a decrease in the number of cows feeding just north of McFail's Hole.

The Helderberg limestones in which the cave is formed are well known for their fossils. However, no unique paleontological resource is currently known to exist in the cave. Dr. David Steadman who has done work on fossils from Kingston Saltpeter Cave and from Trout, New Trout, and Hamilton Caves has expressed interest in looking at the sediments from McFail's as the cave undoubtedly predates the Wisconsin glaciation and may contain some Pleistocene fossils. Dr. Steadman is also interested in other pre-Wisconsin-glacial caves in New York.

Requests for access can be made by contacting the Preserve Management Team via email at: McFailsPreserve@caves.org with any questions.