Located along the Highland Rim escarpment of the Cumberland Mountains, the Myrna Attaway Nature Preserve in Payne Cove contains 20 acres of mature hardwood forest, an abundance of wildflowers, and Red Trillium Cave, a vadose stream cave formed in the Bangor Limestone. The cave has decorated formation galleries and borehole passage in the upper-level paleo trunk, as well as grim crawls that will challenge even the most experienced cavers. 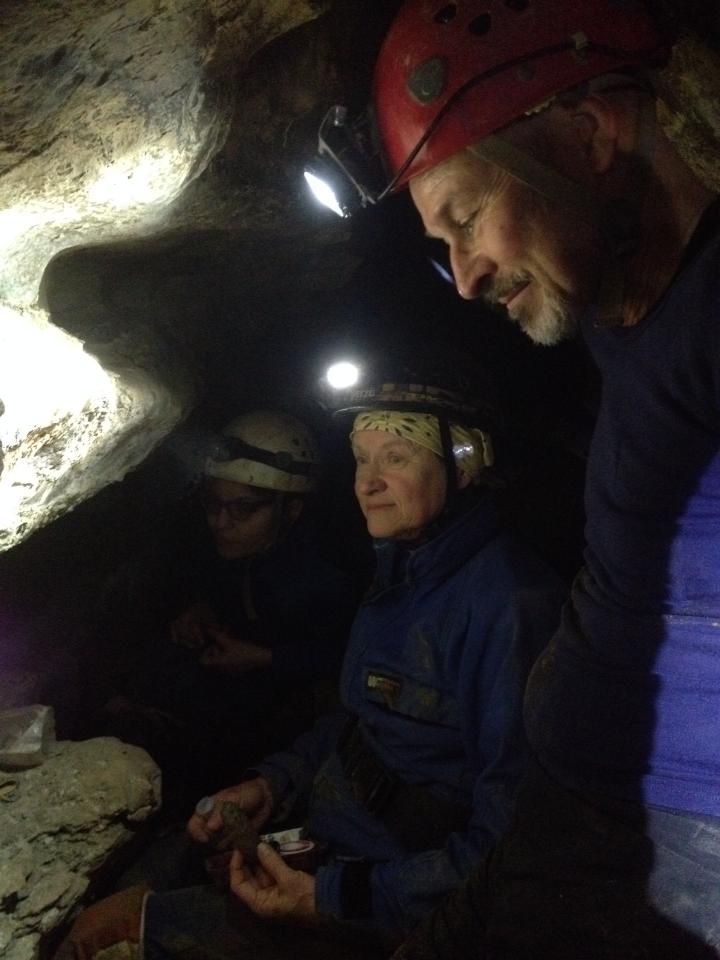 Red Trillium Cave was discovered by Hal Love, NSS 30386 FE, and was named for the proliferation of trilliums that grow outside the entrance, just above a spring. The slide-in entrance leads to a calf-deep stream passage that travels upstream to a bifurcation. The right branch has deep water that alternates between walking passage and hands and knees passage before eventually becoming a lower, wide stream crawl. This branch can be traversed over 1,000 before it becomes too tight. At the end of this passage are two small side leads that are also too tight. A wetsuit is recommended to explore this section of the cave.

The left branch is where the majority of cave is located and requires negotiation through pools of water and laminar streamflow, however a wetsuit is not required for this section of the cave. The passage continues as a meandering canyon with alternating levels that require a boulder scramble to a walking passage then a 12-foot climb up. This climb up leads to a paleo trunk passage that averages dimensions of 20 feet wide and 10-15 feet in height. The north end of the trunk passage includes an area of very unstable breakdown and is not recommended for visitation as a major boulder slide occurred during the survey of the cave.

Following the paleo trunk passage to the south, the passage is mostly large walking passage with several formation galleries. A few side leads trend north and south off this passage, but quickly end. During the survey, a virgin side lead almost 1,000 feet in length was discovered branching off from this paleo trunk, only 50 feet south of the climb up. This side lead, known as Scooper’s Folly, initially starts as a tight crawlway but opens into walking passage before ending in a very muddy breakdown choke.

Continuing in the main paleo trunk, the passage eventually diminishes to hands and knees crawling and then a belly crawl where two domes are encountered. This area was named “No Place like Dome” during the survey to reference the tight squeezes that finally allowed the surveyors to sit-up. This passage becomes too tight only 50 feet past the last dome with no airflow to beckon exploration.

The cave streams in both the left and right branch passages are inhabited by blind crayfish (Cambarus australis). In addition, seasonal rain events flood the cave, particularly in the entrance area. A four-wheel drive vehicle is recommended to access the preserve.

The preserve was donated to the NSS by John Attaway, NSS 16582 RL, in 2020 to ensure the perpetual conservation and preservation of the cave and surrounding land. The preserve is named in honor of John’s daughter, Myrna Attaway, NSS 16921 RL, FE, who was involved with the survey and exploration of the cave. John has always welcomed NSS members to his caves, as long as they followed the NSS conservation ethic of “Take Nothing But Pictures, Kill Nothing But Time, and Leave Nothing But Footprints.”

In 2005, John solicited the assistance of the Sewanee Mountain Grotto to survey Red Trillium Cave as he thought the cave was much longer than the estimated 3,000 feet listed on the Tennessee Cave Survey. John also knew that a survey project would promote comradery among current grotto members, while welcoming others. With John’s support and gentle assurance, an all-female survey team, known as the Psycho Survey Bitches, was formed to survey the cave. Their efforts along with help from the Entourage of Manly Men extended the cave to 5,299 feet and led to the systematic survey of several other caves in the region.

Due to his exemplary support of cave conservation, access, exploration, and education, John was recognized with the NSS Landowner Relations Committee’s Certificate of Appreciation in 2017 and was also awarded the NSS Outstanding Landowner Award in 2020. Thank you, John, for your support and this remarkable gift.

Requests for access can be made by contacting the Preserve Management Team via email at: AttawayPreserve@caves.org with any questions.