The Preserve was purchased from the Western Pennsylvania Conservancy and has a rich history dating back to 1788, when it was mentioned in early publications and county maps. Two attempts to commercialize the cave in 1947 and 1972 were short-lived and today little or no trace can be found of those early business ventures.

Tytoona Cave has hosted numerous youth groups, college students, and cavers with the initial 1,000 feet of passage providing the first caving experience for many people. A well-known natural landmark, Tytoona has an exceptionally attractive entrance along with photogenic qualities of the landscape, making it a popular site.

This cave contains about a mile of trunk passage, divided by water sumps, and a few large rooms that are dry. Beyond one of the sumps is a beautifully decorated room that can only be accessed by highly experienced cave divers. The downstream portion of the cave system exits at Arch Spring, which is privately owned and not located on the Tytoona Cave Nature Preserve property. 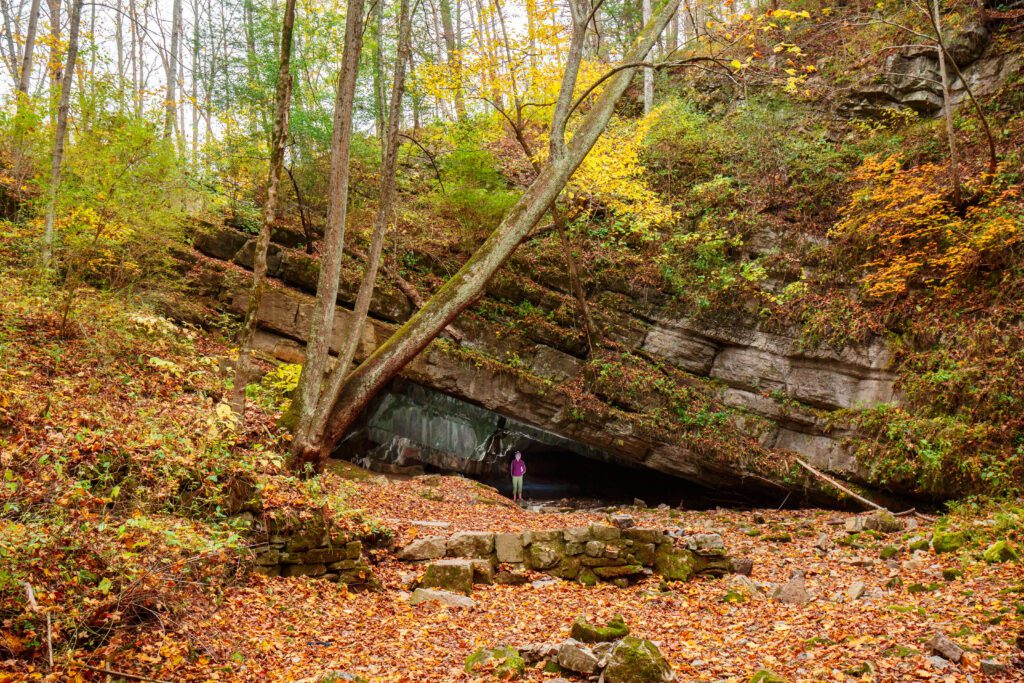 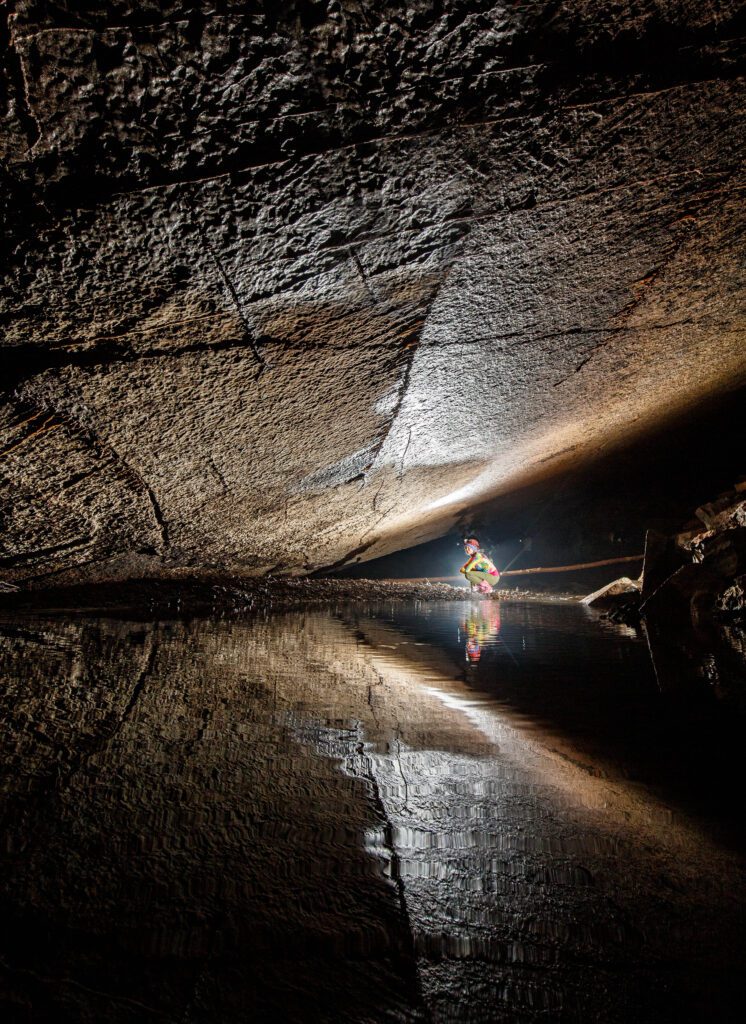 Tytoona has been a subject of folklore and fact dating back to at least 1788. The cave was noted on county maps of the 1800s. The cave has been noted by such renowned cavers and non-cavers as: Henry Rogers (Pennsylvania's first state geologist 1853), Franklin Platt (1881), Dr.Ralph Stone (1924 & 1953), Bill DeVitt (1951), Rick Rigg (1966), Mike Cullinan & Jack Speece (1972), Professor William White (Penn State University), and others. The cave is considered by many as a historical and natural landmark.

Two attempts to commercialize the cave occurred in 1947 and 1972. Both of these business adventures were short-lived and unsuccessful because the cave is not near large highway arteries and occasional high water would close some of the small roads leading to the cave.

Besides the easy general exploring of the first 1,000 feet of passage by cavers, Tytoona has been subject to research by cave divers. Beginning in 1965, significant discoveries were made by diving through sumps. Continued cave diving from 1984 to 1988 resulted in penetration of the cave system from both the Tytoona entrance and the Arch Spring entrance, where the cave's stream reappears on the surface. It was proven that both caves connected with about a mile of passage. Many large rooms were discovered and water depths in at least one of these rooms have been reported to be over 100 feet deep. Diving explorations ended when tragedy struck in June 20, 1988. An experienced cave diver (Roberta Swicegood) died while surveying in a large room from the Arch Spring side. Although she was in accompany of another diver during some of those explorations, she died on a solo cave dive.

The Huntingdon County Cave Hunters have been managing Tytoona Cave for the former owner (the Western Pennsylvania Conservancy) since 1990. Prior to that, many HCCH members took an interest in the cave as far back as 1982. The HCCH has sponsored clean-up trips to remove spray paint, pick up garbage, restore damaged facilities, and generally police the area. Many youth groups were introduced to caving in Tytoona through educational trips. The HCCH has also been responsible for having vandals arrested or removed by the State Police. The WPC has expressed its appreciation many times for the efforts of the HCCH.

Encouraged by Dr. Will White (NSS 2237), the WPC acquired the Tytoona Cave property in 1985 and designated it the "Tytoona Natural Area."

The WPC reviews its land holdings approximately every five years and had decided to sell the property because the Conservancy's focus is on rare and endangered plant and animal species, and not on geological features.

Early in 1996 members of the National Speleological Society were contacted by the WPC to discuss the possible interest of the NSS in purchasing the Conservancy's Tytoona Cave Natural Area in Blair County, Pennsylvania. Members of the Huntingdon County Cave Hunters, who currently have been functioning as property managers for the WPC, believed that it would benefit the NSS to own this cave and petitioned the NSS Board of Governors to act favorably on this acquisition opportunity. The WPC had expressed understandable concerns that the Tytoona Cave property would continue to be managed as a natural area and that any significant natural resources on the site be protected by the NSS. The Tytoona Cave Nature Preserve Management Committee believes that the goals of the WPC are consistent with its own and with the management given to NSS Nature Preserves.

On Dec. 23, 1997, the deed was signed and the 6.8 acre Tytoona property became the property of the National Speleological Society. The property gives the Society ownership of one of the premiere caves in Pennsylvania and its first cave preserve in the State.

The Little Brown Bat has been found in the cave, and some other identified species are occasional visitors. Other types of life include fish and crayfish (some with light pigment) but all appear to have eyes (no complete study has been made). Very large salamanders appear near the first sump — one variety is black with white spots, and the other is orange with black spots. Also, an occasional muskrat and raccoon have been spotted near the entrance.

As reported by caver Jim Kennedy (now employed with Bat Conservation International), "Tytoona Cave is an excellent place for a textbook lesson in cave ecology."

Although little is known about the biological life of the cave, the WPC has done some research and suggests that some isopods are present. Since nitrates from nearby farm fields might be affecting the water supply to the cave, further study is needed to identify aquatic organisms and the impact of any surface pollution.

The large open sinkhole entrance, located in the massive beds of Trenton limestone, measures about 40 feet across and 12 feet high, with the limestone bed dipping at 15 degrees. A small stream which emerges from under the southwest sinkhole wall enters the cave entrance on one side and continues through the entire cave system. The first 1,000 feet is easy horizontal walking passage, but further penetration requires diving to access large rooms. The stream surfaces after about a mile at another well-known landmark called Arch Spring. The Arch is a geological feature similar to Natural Bridge in Virginia, only on a smaller scale.

The cave passage in general maintains dimensions of 30 or more feet wide and a 12-foot or higher ceiling. The cave system has few noticeable bends but rather is quite linear in its development.

Sinking Run, the stream whose watershed includes Tytoona Cave, flows through the cave, rising over a mile away at Arch Spring. This watershed has an area of about 27 square miles. The Management Committee will work with neighboring landowners to help improve the quality of the water flowing into Sinking Run as through the cave. Dr.Will White and students at Penn State University have been studying the hydrology of this karst area.

Reports from 100 years ago describe a human skull and arrowheads that were found at the nearby Arch Spring resurgence. This would strongly suggest that early Native Americans were in the area and no doubt knew of the cave. No known study of early human use has been made at Tytoona. This would be an ideal site to conduct such a study since the cave entrance has the natural catchment basin mechanism in place that could yield valuable discoveries.

A. A letter of intent specifying reason, planned dive date, group size, experience, and participant credentials must be received by the Tytoona Cave Nature Preserve Director no later than 30 days prior to the planned dive.

B. All planned dives into Tytoona will be reviewed by the Tytoona Cave Nature Preserve Management Committee. The Committee reserves the right to accept or reject all diving requests unless told otherwise by the NSS Board of Governors.

C. Each diver must be certified NSS/CDS Full Cave or equivalent and should have sump diving experience or should be willing to be guided.

D. Each diver who qualifies under these guidelines must sign appropriate liability forms.

E. As part of the submitted dive plan, an appropriately trained and willing rescue dive team contact must be provided to the Committee. Availability will be confirmed by the Committee.

F. Approval or denial will be given to the person submitting the dive request at least seven (7) days prior to the proposed dive date. Management Committee members will be on-site at the time of the dive and reserve the right to call or abort the dive due to the condition of the cave, equipment or personnel.

G. Copies of photos, dive trip reports, accident reports, scientific study or survey data and any other documentation resultant from the dive must be provided to the Tytoona Cave Nature Preserve Director. Non-compliance on this point will result in denial of all future diving privileges at Tytoona.

Requests for access can be made by contacting the Preserve Management Team via email at: TytoonaPreserve@caves.org with any questions.